“Just what is it that you want to do?” That’s the sort of barb thrown at anyone struggling for a better world. It’s tempting to reply that “We wanna be free. We wanna be free to do what we wanna do. And we wanna get loaded. And we wanna have a good time…” But it’s not quite as simple as that. How exactly are we gonna be free?

One way to answer that is by flipping it on its head and thinking about the ways in which we are unfree. There’s a brilliant book called Communism for Kids by Bini Adamczak which contains this passage about playing a Ouija board:

A group of people sits in a circle around a board with a glass in the middle. All the letters of the alphabet are written on the board. Everyone puts a hand or finger on the glass, and because everybody is unconsciously trembling a tiny bit, the glass begins to move, as if pushed by an invisible hand, slowly, from one letter to the next. The people don’t realize that they moved the glass themselves, because their individual trembling could never have moved it alone. Instead, they think it was a spirit channeling some kind of message through them.

The Ouija board illustrates pretty well how life works under capitalism. As a matter of fact, the people playing the game are pushing the magically moving glass all by themselves, although not one of them could do it alone. The glass moves only because people act together rather than separately. But they don’t even notice they are cooperating. Their own cooperation happens secretly, behind their backs, so to speak. If those people instead consciously came together to think collectively about what they actually wanted to write, then the outcome would probably be very different.

Adamczak goes on to explain that society is just like the Ouija board:

There’s no magic without the glass, but there’s even less magic without us. The glass didn’t move because of an invisible hand but rather because we cooperated together […] We made everything ourselves […] All these things are as much a part of us as we are a part of them. That means we can change them whenever we want.

Yep, that’s it right there. We made everything ourselves.

Look out the goddamned windows people. Everything you see belongs to us. We ain’t building no alternative nothing. THIS SHIT IS OURS! 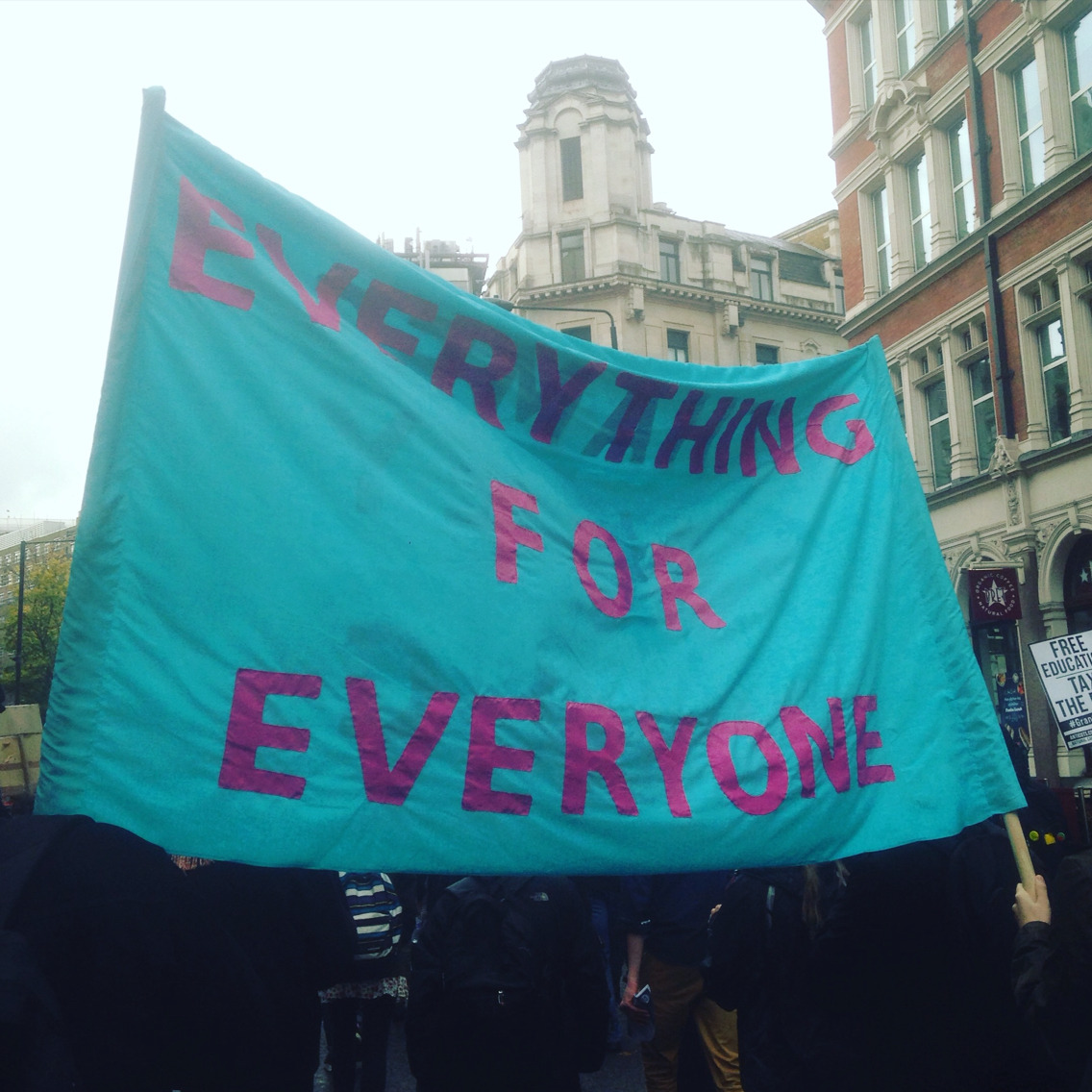 “Everything for everyone.” Those three little words carry a huge amount of power. They suggest the outline of a different sort of world. And by doing that, they offer us a perspective to shape the way we carry on our day-to-day struggles. Our lives (and loves) are never abstract: they happen in gritty everyday reality and it’s here where our struggles begin. We fight against these cuts, those bosses, this government. We organise against this event, those dynamics, this model… Along the way it’s easy to lose sight of our ultimate goal, so it’s crucial to have some horizon, a way to lift our eyes from the here-and-now and see the wider picture. Eyes on the prize. “Everything for everyone” acts as a reminder of just what it is that we want to do…

‘Maximalist’ slogans are nothing new. The battle cry of Omnia sunt communia was widely used in the German Peasants’ War of 1524–1525. In 1917, the slogan “All Power to the Soviets!” served to organise workers in opposition to the Provisional Government in Russia. May ’68 produced such gems as “Humanity won’t be happy till the last capitalist is hung with the guts of the last bureaucrat”. These sorts of slogans – thrillingly confrontational – work by a process of differentiation. They set up a binary: you’re either with us or against us. They work by rupture and antagonism.

But “everything for everyone” is slightly different. It’s quite literally as maximalist as you can get, but it’s open-ended, expansive. It has no boundaries. What do we want? Everything! Who are we? Everyone! No-one – and nothing – is excluded. It clarifies things not by drawing lines on a battlefield but by re-framing the question that’s implicit in those battles: what sort of world do we want to live in? In this respect, it’s a slogan that seeks to fulfil the promise of The Internationale and “unite the human race”.

And it goes even further. By demanding everything for everyone, we assert that “this shit is ours”. We have made this world as it is, so we have to take responsibility for it. Climate change, for example, is our shit: it’s a problem for all of us, not just for those who are already fleeing its deadly effects.

When the Zapatistas in Mexico used the phrase Para todos todo in 1994, it came with a significant rider: “We will demand what is right and right for everyone: freedom, justice, democracy, everything for everyone, and nothing for ourselves.” Nothing for ourselves? It’s problematic. On the face of it, it’s explicitly anti-hierarchical. It says that there are no special privileges for “ourselves”. But by already making a distinction between “ourselves” and “everyone”, it could be seen as re-creating a world where politics is somehow separate from everyday life, a world where struggle is a specialist field, best left to experts and professionals. In fact, “everything for everyone” works so well as a slogan – as a pole of attraction – precisely because it promises to obliterate those distinctions, to empower us all to re-make this world.