‘The history of all hitherto existing society is the history of class struggle’ – Karl Marx and Friedrich Engels, The Communist Manifesto.

‘Who would be free themselves must strike the blow?’ – Lord Byron, Childe Harold’s Pilgrimage – and frequently quoted by Frederick Douglass

We too have worked with a concept that puts capitalist development first, and workers second. This is a mistake. And now we have to turn the problem on its head, reverse the polarity, and start again from the beginning: and the beginning is the class struggle of the working class. At the level of socially developed capital, capitalist development becomes subordinated to working class struggles; it follows behind them, and they set the pace to which the political mechanisms of capital’s own reproduction must be tuned.

Describing this as an ‘inversion of the class perspective’, Harry Cleaver explains: workers struggle; human beings resist domination. And it is these struggles, this resistance, that forces capital – and its managers – to develop more sophisticated modes of subordinating people to its logics. Without our struggle, there would be no development.

A good example of this – that Cleaver unpacks – is the movement from capital’s strategy of ‘absolute surplus value’ to ‘relative surplus value’ production, which Marx explores in parts III, IV and V of the first volume of Capital. Absolute surplus value – sometimes described as ‘extensive exploitation’ – is generated by extending the length of the working day, making workers work longer: more hours per day, more days per year. Relative surplus value – ‘intensive exploitation’ – is produced when workers work more intensively, producing more commodities, in a given number of hours. This is nearly always achieved by the introduction of new machinery, which increases productivity. Of course, capitalists invest in productivity-enhancing machines because they believe this will be profitable. This is obvious. Cleaver’s point – and Tronti’s – is that capitalists make such investments in so-called fixed capital because they really have little choice but to do so. They are responding to workers’ struggles to limit the length of the working day and to a much more generalised refusal of work. Machines don’t get tired, they don’t soldier, they don’t go on strike. New machinery that increases productivity and output is one important aspect of capitalist development. But it doesn’t stop there. Complex machines require more skilled, more reliable workers to operate them – because more complex machines are typically more vulnerable to sabotage. And so on.

Tronti’s ‘workerism’ was focused on male factory workers struggling in and against Italy’s rapid post-WWII industrialisation. But the insight that capitalist development is driven by struggle and resistance has also been advanced by feminists studying women’s struggles, post-colonial scholars recovering the history of slave revolts and other resistance by colonial subjects, and ‘from-below’ historians and anthropologists uncovering the practices of peasants, campesinos and commoners. It’s the perspective captured in Larkin’s maxim that his friend and comrade James Connolly put on the masthead of the Workers’ Republic, the paper he founded in 1898: ‘The great only appear great because we are on our knees. Let us rise!’ It’s the perspective that W.E.B. Du Bois channels in his ‘general strike’ thesis. Du Bois’s argument is that slaves’ class consciousness and their massive and multi-faceted revolt changed the nature of the United States’ civil war, from a war to save the Union into a war to end slavery – thus a war that forced capitalism onto a new trajectory. 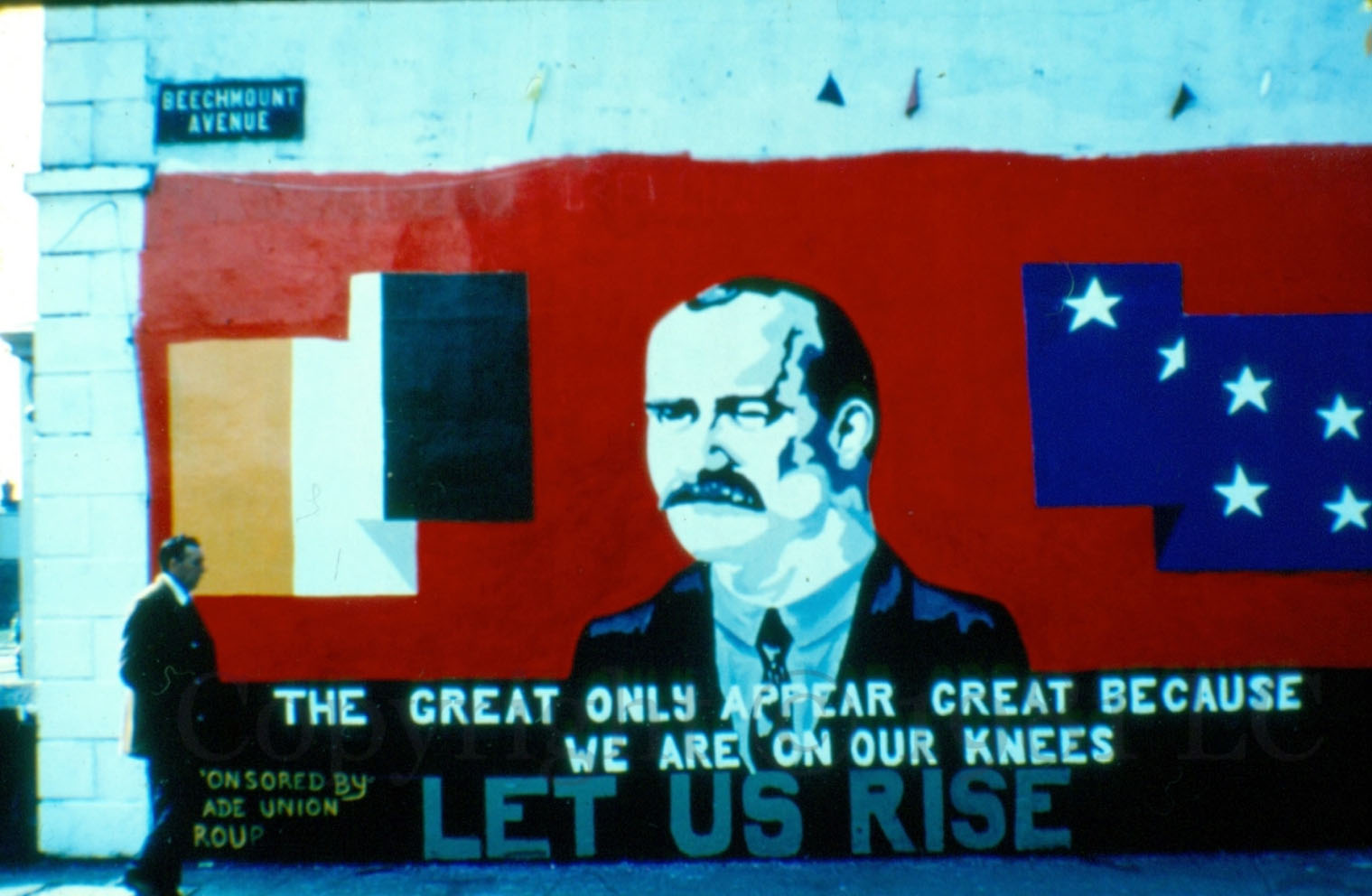 There are two points to make about this perspective. First, it goes against everything we have been taught, almost everything we are exposed to, day in day out. In Stephen Spielberg’s film Lincoln, for example, Abraham Lincoln is shown as the driving moral force responsible for ending slavery – reinforcing both the popular reputation of the 16th president of the United States and the ‘great man of history’ understanding of social change. We celebrate the accomplishments and inventions of other great men – James Watt, James Hargreaves, Charles Babbage – but forget the context in which they were working and struggling. We are rarely taught that the problems they set out to solve were as much social as ‘technical’. Marx: ‘It would be possible to write a whole history of the inventions made since 1830 for the sole purpose of providing capital with weapons against working class revolt.’ (The best such history of these inventions is this one – but it’s not part of any national curriculum that I’m aware of.) When commoners or proletarians appear in these stories, they are usually passive and they are usually victims – people we might pity.

But consider Silvia Federici’s accounts of witches and witch-hunting. Reading her work, we are reminded that those thousands of women, and a smaller number of men, who were persecuted as ‘witches’ were victims – as were countless others who were thereby intimidated and pacified. They were victims because of their persecution as ‘witches’ and, more broadly, because it was women, especially older women, who were typically more impoverished and socially excluded by the brutal dislocations caused by the development of capitalism. But what distinguishes Federici’s work from other histories of ‘witchcraft’ and witch-hunts is that she points out that for these women to have been so victimised and so persecuted, they must first have inspired fear amongst social elites – clergy, landlords and well-to-do peasants who gained economically from the processes of enclosure that were dispossessing the majority. These women were a threat! Victims, yes, but not passive; they were also active subjects of history. Silvia Federici opens up the possibility that witch-hunting was widespread – in North America and Europe in the sixteenth and seventeenth centuries, and in parts of Africa and Asia today – not because women were weak, but because they were, and are, powerful.

Second, when we are first exposed to this perspective it can be quite jolting. Not only does it stand in such contrast to the ‘great man’ histories and to the dominant narrative of most oppositional thought, this way of seeing the world, this mode of thinking – both as methodology and as ontology – opens up a possibility that is initially troubling. Perhaps we are to blame. For the ‘productivity slowdown’ of the 1970s. For the rise in mechanisation and automation – think ‘jobless recovery’ – and the ‘outsourcing’ of jobs. For the expansion of lethal nuclear power plants. For the ‘destruction of the family’, fast food and the TV dinner. For the return of low-waged domestic labour. For the catastrophically unsustainable burning of fossil fuels. Perhaps we have brought these misfortunes on ourselves – just as the misogynist blames the assaulted woman for dressing or behaving ‘provocatively’.

In a sense, this is true. Take George Caffentzis’s extensive scholarship into the political economy of energy – probably the second most important commodity or set of commodities, after that ‘special commodity’, labour-power itself. (George’s work directly updates Marx’s own writing on the introduction of machines in Capital.) In one strikingly simple yet illuminating paper, he estimates the thermodynamic energy produced annually by the burning of oil vis-à-vis the energy that, hypothetically, could be produced in a year by human labourers – creating what we might think of as an estimate of the ‘calorific composition of capital’. His argument here is that the astonishing growth in the work done by fossil fuels – first coal and then oil – over the past few centuries should be understood as capital’s response to workers’ refusal of work.

Another kaleidoscopic side of this history is the myriad struggles of energy workers themselves (over wages, working conditions and the uses to which the product of their labour is put) along with those of ‘environmentalists’ (from campaigners against ‘smog’, to anti-nuke protesters, to ‘keep it in the ground’ activists). Taken together, these struggles have profoundly shaped capitalism and the world we now inhabit.

‘Blame’ is not quite the right word here. But we should nevertheless recognise – and embrace – our responsibility. For our responsibility – overawing as it might be at times – is our power and our liberation. In the appalling fucked-up-ness of a world in which violence against women – as well as against LGBT people – is so widespread, a kernel that should give us succour is that a woman’s – or a gender-queer person’s – power to provoke is exactly that – a power, a power that is indicative of these subjects’ potential to transform gender relations, sexual relations and – more broadly – social relations. In the appalling fucked-up-ness of a world full of so many horrors and so many crises, we must take succour in the knowledge that we created this world – and we created its crises.

We are the crisis of capital and proud of it. Enough of saying that the capitalists are to blame for the crisis! The very notion is not only absurd but dangerous. It constitutes us as victims.

This is why human history is a drama and not a tragedy. We should never forget Marx’s famous observation in The Eighteenth Brumaire: ‘Men make their own history, but they do not make it as they please; they do not make it under self-selected circumstances, but under circumstances existing already, given and transmitted from the past.’ But, in fact, we should reverse it in order to invert its emphasis: we rarely do so in circumstances of our own choosing, but nevertheless we make our own history.

This is not really a new way of seeing. But this lens – the lens through which we see change coming from below, the lens through which we can both see the world anew and see new worlds – must constantly be polished and refined. It keeps getting fogged up by the hot air of dominant narratives, dominant histories – not only perpetuated by politicians and the BBC, but by most Marxists, social movement activists and self-styled alternative and radical media. Each political generation must learn to use it, to see in this way.

Take the furore over Britain’s imminent exit from the EU. I see Leftists dolefully sharing predictions of the likely damage to trade and ‘the economy’ following Brexit – just as some of those Leftists approvingly shared reports in which establishment economists or the International Monetary Fund have made supportive noises about the prospects for growth and ‘the economy’ under a Corbyn-and-McDonnell-led Labour government. Only two decades ago there was a hundreds-of-thousands-strong movement against free trade. This movement was more-or-less successful – in its immediate objectives at least: we forced the abandonment of every ambitious free-trade treaty and discredited the World Trade Organisation, along with the IMF and the World Bank. A shocking victory. It’s true we failed to foment wider social revolution – and it’s possible these successes of the counter-globalisation movement helped pave the way for the likes of Trump and rising xenophobia more generally. But we should nevertheless remember – and celebrate – these victories, even as we grieve for their lost potential. These victories are expressions of our power. We – and not Trump or anyone else – buried the ‘liberal international order’!

I haven’t been able to trace the source of the final quote. I found it jotted down in a notebook, maybe from years ago. It sounds like Subcomandante Marcos, one of the most important critical thinkers of the 20th century and beyond. But it could be Frantz Fanon, John Holloway or Ursula LeGuin (‘maybe the Odonian manifesto in The Dispossessed?’). But it’s appropriate that no one seems sure. As one comrade commented: ‘it’s the core of all magic’ and, most importantly, ‘it’s from everywhere!’

We make this world. We can unmake it and make others.