I was excited when you arrived and got involved in the branch. You captured key positions – I say ‘captured’, probably you just volunteered for them when incumbents had had enough – and the character of the branch seemed to change overnight. Where before branch officials appeared acquiescent and eager to maintain cordial relations with management, you were belligerent with bosses and prepared to fight. I give you credit for this. And I give you credit for getting me involved too. (Though as a comrade remarked later, you preferred for me to be inside the tent pissing out, rather than outside and pissing in.) I knew you were SWP members – or possibly you’d allowed your membership to lapse after the Comrade Delta events – but I was optimistic we could still work together.

I can’t fault your dedication and your discipline. But you never seem very interested in strategic thinking – and this was obvious from the beginning. Militancy of course! But always a reluctance to discuss what this might actually mean. How exactly might we strike against our employer? And beyond better ‘pay and conditions’, what might our workplace look like? Under your leadership of the branch there never seems to be enough time or space to talk about these questions; in fact such questions are usually shunted to the agenda-end and then timed out.

Other problems became apparent later. If I or others express disagreement with you, you do what you can to neutralise and shut down that dissent. First you ignore it. Next might come an appeal to your own ‘experience’ – though actually, your ‘experience’, like that of all of us on the Left for the past four decades, has mostly been of defeat. Or you might instead cite union or branch ‘policy’ – when in fact no such ‘policy’ has ever been discussed, let alone agreed. Or you might allude to what is ‘expected’ – when such ‘expectations’ only ever mean what you would like to happen. If none of those things do the trick, then come the accusations of being ‘divisive’, of ‘damaging’ the union. Even of making personal attacks against you. (When, of course, the reverse is usually the case: you are past masters of the personal attack.) A final resort is the threat to use bosses against those who’ve refused to submit to your ‘discipline’. Let me repeat that. Although this happened only once, once is enough: on that one occasion you threatened to report me to managers if I did not do as you wanted. For shame!

I wonder if you ever ask yourselves what your legacy will be, how people will remember you. I have spoken to once-active comrades who withdrew because of your hectoring and your incessant demands. I have spoken to comrades who might have become more active if it weren’t for your patronising behaviour. I asked someone who used to work with you elsewhere if they’d ever encountered you. This was the response: “I once arrived at a branch meeting a few minutes early. P was there with one of his SWP comrades. ‘Sorry’, he said, ‘we’re having a meeting. Can you wait outside?’” Is that really how you want to be remembered?

I wonder why you do it. Why the deceit, why the hubris, why the bullying? At first I wondered if you thought I was stupid. Or perhaps you are. Have you never realised that I have been involved in anti-capitalist politics for more than three decades? Perhaps you are stupid. But it’s more than that. You simply can’t help yourselves. You’re like the scorpion of the fable with the frog. It’s in your nature. If you get the chance, you will sting and kill the very struggle that carries you.

I doubt you can change your nature – which would be revealing in itself – ‘revolutionaries’ who want to change the world but who are incapable of changing themselves! You will no doubt continue… stinging the struggle. But so will I. Remember I have been an anti-capitalist militant for 30+ years! And I thank you. You have reminded me that my struggle is a struggle against all the bosses – not only the employers, but the bosses and would-be bosses of the Left. 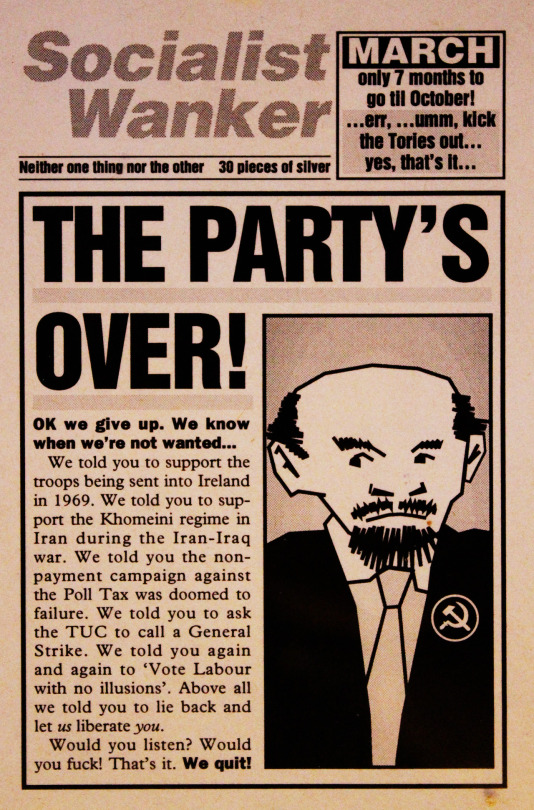