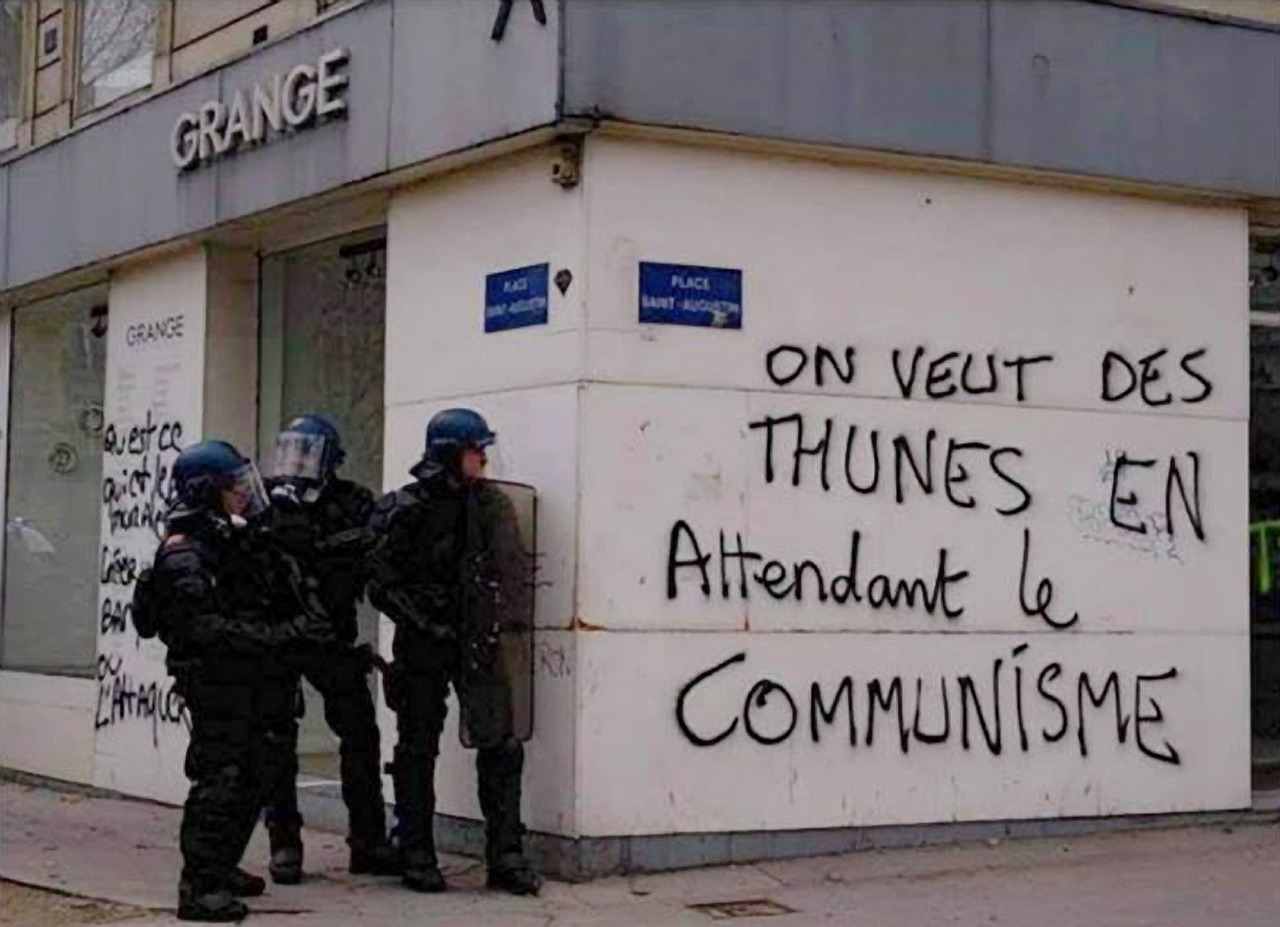 The above graffiti* appeared on the streets of France during the recent gilets jaunes protests. Roughly translated as “Give us cash while we wait for communism”, it’s perhaps another way to re-pose Luxemburg’s question: Reform or revolution? Inside or against? This or that?

Like most people, I’ve got a complicated relation to reformism, neatly encapsulated by my introduction to political thinking. I was working as a waitress in a cocktail ba… no, hang on, I was working in the packing department of a pneumatics supplier when two fellow workers moved from talking about punk to talking about politics. “Are you a lefty, then?” said one. “Umm, dunno…” I muttered, not really sure what they were on about. I mean, I’d got a post-punk sensibility (this was 1981) but I was pretty wet behind the ears. “Well, you should get hold of Tony Benn’s Arguments for Socialism and The Communist Manifesto…” And there you have it: a manifesto for radical social democracy from a bona fide aristocrat set alongside a call for global proletarian revolution. Give us cash while we wait for communism indeed…

The standard defence of reformist politics is that utopian impulses are all very well but we have to operate in the here and now. If that means small, incremental steps for social change using existing infrastructures, then so be it. Whether it’s better working conditions, improved housing, new transport policy initiatives, it’s indisputable that something is better than nothing. Sure, something is better than nothing. I’m not daft. But is that the only choice? Will those small somethings add up over time to everything? Will a series of piecemeal changes open up the space for a totalising critique? Put another way, how can we square this approach with the revolutionary daring which proclaims “I am nothing but I must be everything”?

When Jeremy Corbyn swept to victory as leader of the Labour Party in 2015 and was then re-elected with an increased mandate the following year, it was placed alongside victories for the likes of Podemos and Barcelona en Comú in Spain and Bernie Sanders in the US: a British version of the worldwide “electoral turn”, a wave of progressive politics which would at last offer an alternative to a corrupt and zombified neoliberalism. Comrades who had been active for years in extra-parliamentary struggles enthusiastically signed up to the programme and did significant legwork in the 2017 general election. Labour’s defeat on the night (by a smaller margin than predicted) was again taken as a sign that “something is really happening…”.

But what exactly is that “something”? Two points spring to mind.

First, there really is nothing new under the sun. Over the past hundred years there have been countless decent revolutionaries in the UK who have dabbled with the parliamentary road to socialism. My two co-workers were both part of the hugely influential Bennite left in the early 1980s; I joined in 1983 and canvassed in that year’s election. Many of today’s Corbynites refer back to that era to validate their own journey, as if Corbyn’s ascension to power is the culmination of a long march through the institutions. But that’s far too simplistic. In fact, Corbyn self-evidently did not ride to power on the back of a powerful extra-parliamentary social movement. Instead his victory was a surprise to almost everyone involved. More importantly, as some have pointed out, those periodic electoral turns tend to happen not from positions of strength but at the arse-end of social movements, as activists seek some form of shelter from collapse, fragmentation and burnout.

Second, there is an almost inescapable logic to electoral politics which is all about leadership, Westminster and triangulation towards the (perceived) media. The Labour Party has to act quickly to appease the City, Daily Mail journalists, ‘public opinion’ in the traditional Labour heartlands etc etc. So we get the infamous calls for tighter border controls and more police on the streets, while the shadow Chancellor promises a ‘competitive’ economy and boasts about ‘productive’ meetings with asset fund managers. The revolutionary project gets reconceptualised as a strategy for gaining political power – or more precisely public office. Pragmatism is the order of the day: cash not communism. In this strategy, Left celebrities, intellectuals and academics are disproportionately represented – and without wider social movements to rein them in, all sorts of nonsense gets spewed out… Apparently we are witnessing “a social movement poised to take state power”. The level of hubris on display is quite staggering.

None of this is to say that revolutionaries shouldn’t join the Labour Party (as if I’m in a position to judge…), but we need a little bit of honesty here. I totally get the frustration with horizontalism, but we have to start by thinking through the exhaustion of that cycle of struggles which erupted after 2007–8, not to mention the defeats of the 1970s, 1980s, 1990s etc. It’s hardly surprising that the last 40 years have left us shattered, marginalised and occasionally desperate. So there’s no doubt that a Corbyn-led administration would offer a much better place to live for most of us, while also creating a potential space for more radical, transformative politics. But when I’ve talked to a couple of comrades swept up in Corbynmania, they’ve gone much further, explaining that the key attraction for them is “actual social change” – as if voting Labour (and getting bussed into other cities to encourage others to vote Labour) is entirely unproblematic; and as if refusing to join up means you’re not serious about “actual social change”. It’s disingenuous, to say the least.

Similarly I keep hearing people trot out the line that the Labour Party is now “the only game in town”. They state it as scientific fact rather than a political claim (one that’s deeply contested). It’s as if the whole trajectory of neoliberal politics from the late 1970s onwards is just a matter of having the wrong leader or the wrong ideas – it’s nothing to do with class composition at all. And I know it’s only a phrase, but I’m starting to hate the use of the word “game”. It adds to the whole notion of politics as a career choice for intellectuals, a job for specialists. A bunch of London postgrads joking on stage with John McDonnell or dancing with Clive Lewis is “a game”. I’m reminded of Adrian Mitchell’s comment that “Most people ignore most poetry because most poetry ignores most people.” It’s the same with “politics”.

Reform or revolution aren’t the actual choices on offer. We don’t have to choose between this or that. The old Solidarity rule of thumb is useful here, as ever:

Meaningful action, for revolutionaries, is whatever increases the confidence the autonomy, the initiative, the participation, the solidarity, the equalitarian tendencies and the self-activity of the masses and whatever assists in their demystification. Sterile and harmful action is whatever reinforces the passivity of the masses, their apathy, their cynicism, their differentiation through hierarchy, their alienation, their reliance on others to do things for them and the degree to which they can therefore be manipulated by others – even by those allegedly acting on their behalf.

* Yeh, yeh, I know this isn’t really a random slogan thrown up in the heat of battle but it’s a pretty cool photo. And I can dream, can’t I?