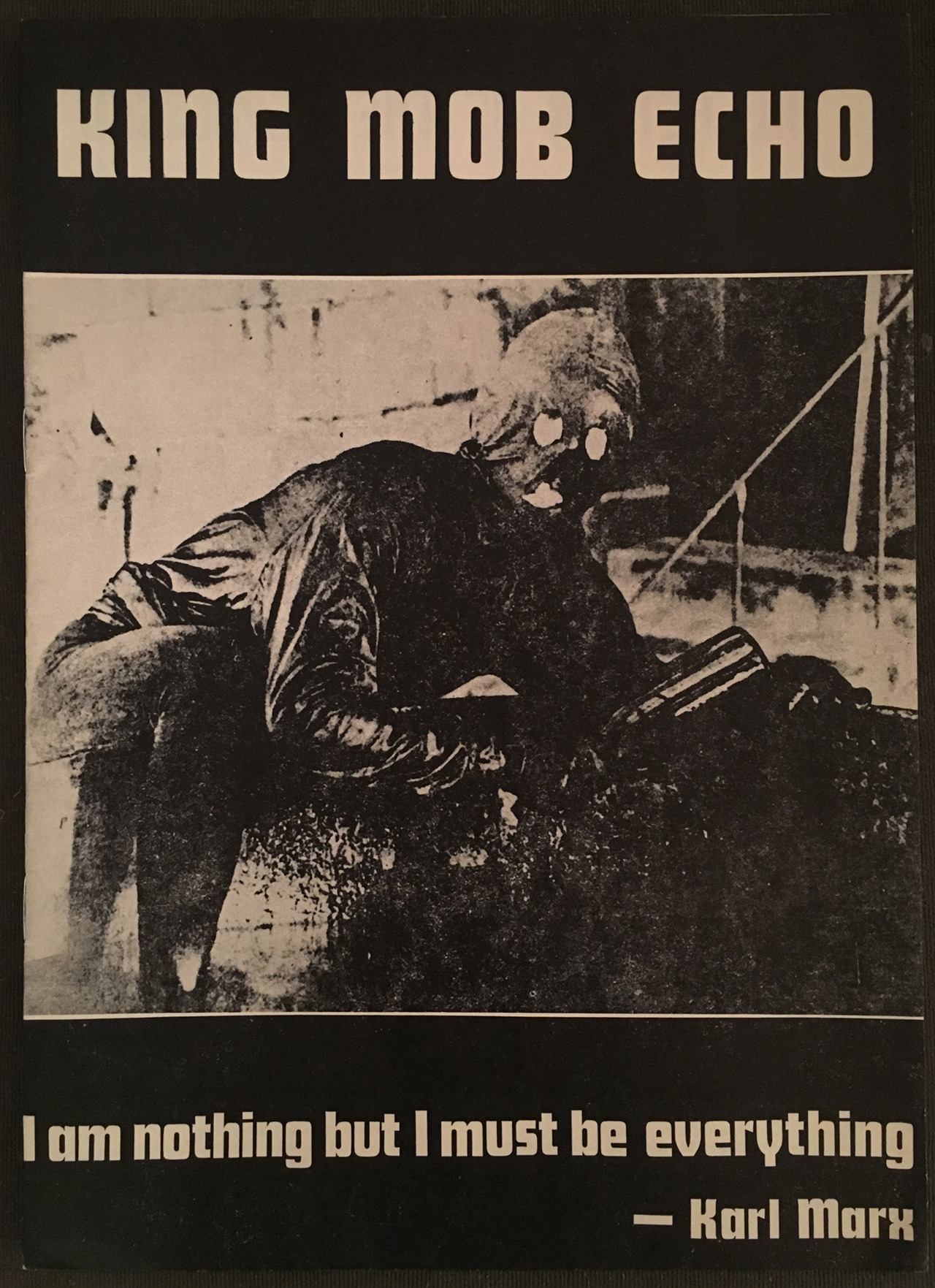 I’ve just finished reading King Mob: A Critical Hidden History so it seems a good excuse to post this cover from the first issue of King Mob Echo. Plus it features that brilliant Marx quote.

I’ve always been a fan of the Wise brothers (because of their BM Bis/Blob/Combustion work) but while King Mob has some of their usual sparkle, it turned out to be a fairly depressing read. Like a lot of writing about the late 1960s/early 1970s it’s a tale of comedown writ very fucking large. As that huge wave of global struggles ended, the social movements it had thrown up splintered and fell apart. In the UK, as the spirit of collectivity and experimental daring started to disintegrate, people looked to prepare individual escape routes. As Enzo Traverso puts it, “the concrete utopias of collective emancipation turned into individualized drives for the inexhaustible consumption of commodities.” Practically this meant people turned to drugs; cracked up; dabbled in mysticism; got tangled up in petty (and not so petty) crime; or more prosaically, got their heads down and found ways to survive. Of course those who came from money found the comedown a little easier to handle—many fled the movement to become good capitalists, changing their votes along with their overcoats—but the fragmentation was real and left lasting scars on all those who lived through it.

The left-wing melancholy which Traverso writes about pervades much of King Mob. And that’s hardly surprising when you consider what the Wise brothers and their comrades lived through. As Traverso makes clear, melancholy isn’t a choice or a strategic decision: it’s what the survivors are left with after the shipwreck. The key thing—and I know I’m banging the same old drum here—is how you work through those experiences. How do we deal with the history of defeated revolutions, with the apparent eclipse of those utopian impulses? Traverso sees melancholy in a more positive way than some:

If we abandon the Freudian model and “depathologize” melancholy, we could see it as a necessary premise of a mourning process, a step that precedes and allows mourning instead of paralyzing it and thus helps the subject to become active again. In other words, melancholy could be seen as an enabling process in which, according to Judith Butler’s lexicon, the subject experiences “a withdrawal or retraction from speech that makes speech possible.”

A beaten generation? Well, maybe. But it’s also crucial to remember that the defeats of the last fifty years (just like the defeats of the last 300 years) have not been final. How could they be? It might feel like a history of battles fought and lost, but the class war against domination is not over. We are nothing but we will become everything…